Elijah Lyttleton Herewane was born on 25 October 1895 at Rosaville near Mount Gambier to Stephen Herewane, a Maori, and Jane Ralston, an Aboriginal woman. On 8 August 1896, Stephen and Jane were charged at the Mount Gambier Police Court with having no visible means of support. The charges were withdrawn, but instead their children were charged with being “destitute”. The children were Joseph, Stephen, Eleazar, Isaiah, Mary Jane, and Elijah, all ten years of age or younger. The court allowed the parents to keep their three younger children, including Elijah, but the three older boys were sent to the Industrial School at Magill in Adelaide.  Sadly, later that year, Stephen drowned in the South Para River while swimming. In March 1907, Elijah was himself admitted to the Industrial School, thus losing connection to his family. His older sister Mary Jane had also been admitted to the Industrial School the year before. It appears that Elijah started to use a different name, as in 1914, a Leigh Elijah Herewane was charged with burglary at Murray Bridge. He pleaded guilty and stated that he had come to Australia from New Zealand as an infant and did not remember his parents. He was sentenced to nine months’ imprisonment.

He enlisted at Keswick on 13 July 1915 giving his age as 21, using the name Leigh Elijah Herewane and an address in Richmond, Victoria. He also gave his place of birth as Wanganui, New Zealand. Prior to his enlistment he had been working as a labourer. He was allocated to the 9th reinforcements to the 16th Battalion. After initial training at the Mitcham Camp, he embarked aboard the Star of England at Adelaide on 21 September. He arrived in the Middle East a month later, and after a brief stint in hospital with jaundice, was briefly transferred to the 48th Battalion before being posted to the 4th Pioneer Battalion in mid-March 1916. After further training his unit embarked for Marseilles in southern France in early June. Soon after his arrival in France he was charged with a disciplinary offence and was awarded 28 days Field Punishment No. 1, which involved being shackled to a post for several hours a day and undergoing hard labour. This was a common punishment for disciplinary infractions by soldiers during the First World War. He continued to serve with his battalion throughout 1916 and early 1917 before spending two weeks in rest and convalescence camps with lumbago in May. He rejoined his unit in June, but was arrested by the military police for being absent without leave for two hours. His punishment was seven days of Field Punishment No.2, which was similar to No. 1, but did not involve being shackled to a post. He was also docked two weeks pay.

On the night of 24 September 1917 he was a stretcher-bearer with his company when they were caught in a very heavy artillery barrage. For his actions that night he was recommended for the Military Medal for bravery in the field:

‘He was a stretcher bearer with his company proceeding to work on the Westhoek-Zonnebeke Road. Just as they reached the road, they were suddenly caught in a very heavy barrage lasting about 30 minutes and suffered many casualties. Throughout this period, he moved among his company attending the wounded and never attempted to take cover himself. It was mainly due to his gallant conduct and absolute disregard for his personal safety that the wounded were removed to a place of safety thereby saving many of their lives.’

His award was posted in the London Gazette of 14 December 1917 and the Commonwealth of Australia Gazette of 2 May 1918.

He was hospitalised with a fever in mid-October 1917. In late November he was disciplined for creating a disturbance and lost his lance-corporal stripe. There is no record of when he had been appointed as a lance-corporal, but it may have occurred at the time he was awarded the Military Medal. He rejoined his unit at the end of November, and was given two weeks leave in the United Kingdom in January 1918. In February he was admitted to hospital with an irregular heartbeat, and after recovering he was posted to the Australian Veterinary Hospital at Coquelles. He got into strife at this unit on several occasions, and was sentenced to several more stints of Field Punishment No. 2. He was subsequently posted back to the 4th Pioneer Battalion in June 1918. No sooner had he rejoined his old unit, than he was in trouble again. Another 28 days of Field Punishment No. 2 followed. In early September 1918 he was admitted to hospital for a couple of weeks, again with heart problems, and this recurred in October. He was then posted back to the Australian Veterinary Hospital, but the decision was taken to return him to Australia for medical discharge.

He returned to Australia aboard the Morvada, embarking on 4 January 1919 and disembarking at Adelaide on 18 February. His pending arrival was noted in the Daily Herald of 8 February. On 27 February, he was feted at a welcome home social held at the Truro Institute. He was medically discharged on 13 April. On 4 July, Leigh was presented with his Military Medal by the Governor of South Australia, Sir Henry Galway, at Keswick Barracks. In addition to his Military Medal for bravery, he was also issued with the 1914-15 Star, British War Medal, and the Victory Medal for his service. His older brother Joseph served with the 5th Field Artillery Brigade and survived the war.

He was living in Renmark when he received his British War Medal in October 1921. He applied for a war pension while living in Adelaide in 1924, but his claim was rejected as he did not attend a medical review. In 1927, he was involved in advocating for builders’ labourers by speaking at the Botanic Park, Adelaide, and was prosecuted for speaking there without a permit. He married Hellene Richardson Jennings at Wayville on 11 September 1929. He was also a notable advocate for unemployed returned soldiers during the Depression in the early 1930s, and was involved in trying to change the administration of the South Australian Soldiers’ Fund so that it would better help unemployed soldiers and their families. In about 1934, tired of trying to keep one step ahead of the bailiffs in rented accommodation, Leigh and his family moved to the Semaphore Esplanade sandhills where he built a series of wood and iron buildings to house the family. In about 1939 the local council forced them to move, and they went to Barmera, where Leigh built a series of similar huts on the shores of Lake Bonney. During World War II, Leigh briefly enlisted in the Army as a private with the 4th Garrison Battalion in mid-1940, but was discharged after two weeks. By 1945 the family were living at Burra. Two of his sons served in World War II, Alexander James, and Edward Elijah Lyttleton. 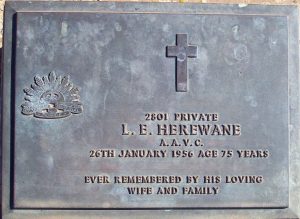 Leigh died on 26 January 1956 at Burra, aged 60, and was buried at the Burra Cemetery. His name is inscribed on the path of the Aboriginal and Torres Strait Islander War Memorial at the Torrens Parade Ground, Adelaide.

This profile sheds a bit of light on who Leigh Elijah Herewane MM was. At times a bit of a rascal, but when lives were at stake, he was a courageous and dependable man whose actions were vital in saving many lives. He is just one of many soldiers who, in the face of intense scrutiny because his heritage, put his life on the line regardless.