Representation. Why does it matter?

In early 2020 a study was released that essentially proved the existence of unconscious bias against First Nations people from Australia in seventy-five per cent of people.

The study was conducted by academics from the Australian National University. The data measured was taken over a ten-year period from over eleven thousand subjects. The study’s finding was that “implicit or unconscious bias toward our first Australians is not imagined”, that quote coming from Siddarth Shirodkar, the report’s author.

So, what is unconscious bias exactly?

In an interview with ABC radio, Mr Shirodkar explains “Implicit bias, or unconscious bias is a person’s automatic reaction when they’re presented with a particular stimulus. So, for example, if a person associates more positive terms with an Indigenous face, and negative terms with a Caucasian face, they’re seen as having a bias in favour of Indigenous faces. But the reality is, 75 per cent of Australians who were tested in this — and that was over 11,000 people — displayed an implicit bias towards Caucasian faces: so, associating positive terms with Caucasians.”

And what is representation? And why is it important?

Representation, as referred to in this article, is the way that media, in all its forms – news, television, films etc, deals with ethnicity, age, gender, national and regional identity, social issues and more. 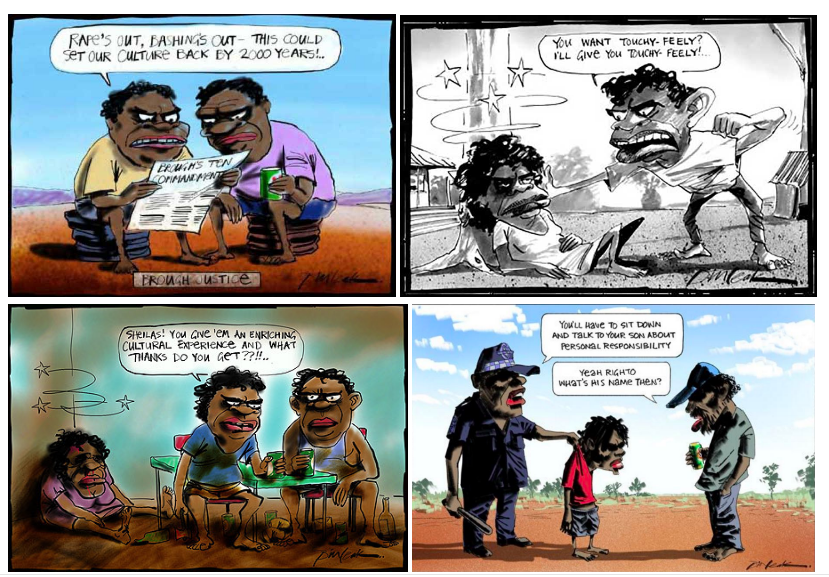 This makes these mediums very powerful in the way it can influence the world around them.

This includes the way that text is constructed. Word placement and sentence structure. Or in film and television, camera angles and editing can make a difference. Image choice (location, outfits, makeup, hair do’s etc) is also a factor.

Other factors include mediation, or what processes has the piece of work may been through before an audience can see it. For example, has a film based on First Nations culture had First Nations consultants? Have newspaper articles been fact-checked?

Selection is also a factor, what has been chosen to be included? Which facts have made the report? Do they tell the whole story? What words have been selected to accompany images?

Stereotypes is also a big factor, what characteristics of a certain group are chosen to have been shown? Are they accurate, or exaggerated?

And finally, who has chosen the standards by which these things are decided? What are their ideologies? What are their beliefs? Have they influenced these standards? Are they politically affiliated? Or do they have conflicting interests?

Several times in Australia, the media has misrepresented First Nations peoples leading to legal action, for breach of the racial discrimination act or racial vilification. Channel 7 faced legal action in 2018 for a segment that made dangerous assumptions about First nations children, parents and used stock footage of children that had nothing to do with the story being told and giving false information. A consequence of the story was an increase in racism on social platforms.

The same issue occurred again in 2018, except this time it was reported by several broadcasters and publishers that ‘African Gangs’ had essentially taken over Melbourne. Speaking about the Melbourne African community, Melbourne’s Deputy Police Commissioner Shane Patton told The Guardian that “The vast majority are good people This is a small group of youths. We will target them. We will hold them to account.” The result of these reports was once again, a rise in racism against the African and Immigrant communities.

A third example of the effects of negative representation is the effects that reporting around the coronavirus had. While there does not seem to be any legal action taken against any broadcasters or publishers in Australia, Former American President Donald Trump was heavily criticized for the language he has used when speaking about coronavirus. The language that is reported here in Australia, and as such, it was easy to see the rise in racism against anyone of Asian appearance in Australia and China in general.

According to unconsciousbiasproject.org “unconscious bias can manifest in many ways, such as how we judge and evaluate others.”

And according to a TED TALK by Christiane-Marie Abu Sarah, a behaviourist historian who studies aggression, moral cognition and decision making, “we make decisions based on the information we trust, yeah? So, if we trust bad information, we’re going to make bad decisions.” Sarah also says that this information often comes from what is called an information bubble.

An information bubble is information from a select number of sources that reinforce your worldview, political views and opinions.

What I personally see when I look at the news, whether it be online. on television or otherwise, information is given one of two labels. Left or right. The truth is that information and data have no political affiliation, it can’t, it simply exists. But that doesn’t mean the way that information is spread hasn’t given an unintended narrative; the responsibility of truth lies upon the reader, listener and watcher in these cases.

Given the above information, it is clear that the wrong type of representation in the media, and in general is a direct cause of both conscious and unconscious bias. Unconscious bias can be so embedded, that according to Sarah, “If I show you a picture of two different coloured hands, and sharp pins being driven into the different coloured hands, if you’re white, the chances are that you will experience the most sympathetic activation, or the most pain when you see a pin going into the white hand.” She also explains that

ne who is not white will have the exact same experience when seeing the same things happen to a hand that is similar to their own. Sarah says that this is not a biological occurrence. It is learned behaviour. And that the more experiences a person has with communities unlike their own, the more that person will feel their pain, and see them more like themselves.

Essentially, if a person sees the same thing, every day, without change, their opinions also will never change. But if they ensure they see a range of content and have a range of experiences, then they are more capable of changing their opinion.

So the right representation can do wonders.

In 2018 when Black Panther was released, First Nations actress Shareena Clanton organised a fundraiser to get First Nations and African children to the cinema, ensuring that they can see people like them on the big screen. On a Q&A appearance on the ABC, Shareena went on to say that “It’s about ascension of blackness. It’s about empowering our next generation.”

The idea that the right representation can make the difference that Shareena spoke of, is proved by African American transgender actress Laverne Cox. In a recent video interview, Laverne said that the first time she felt her identity was truly represented on screen was when she saw Transgender actress Candis Cayne cast in a lead role in the 2008 television show Dirty Sexy Money, alongside William Baldwin and Donald Sutherland. “It was historic for me” Laverne goes onto say, and that “Candis made me believe I could be who I was”.

The reverse was said by popular actor, Ojibwa (First Nations Canadian) man Adam Beach about the casting of a non-First Nations actress, as a prominent First Nations character in the hit Kevin Costner series, Yellowstone. Beach even called for a boycott on the series, saying “Failure in Diversity. I’m asking my Native Actors to stay away from this project. “Yellowstone” is telling the world that there are no Native actresses capable of leading a TV show.”

In contrast, Beach himself starred in the 2002 Nicolas Cage film Windtalkers, which was in many ways about the use of Navajo code talkers during world war two. Beach once said in an interview once, when offered the part, Beach told the film’s producers he could only do it if they asked permission from the Navajo Nation, to which he said the producers “thought I was crazy”. However, the producers did just that and Beach was given permission to play the part provided that real Navajo Nation members were hired for any other Navajo code talker roles.

Not only did representation from previous films give Adam Beach give the outside world a positive look at him as an actor, the Navajo Nation and their contribution as code talkers through the film, but it also changed the power dynamic. Beach said, “they had to follow lead because they wanted me to play the role”.

Something as simple as a person seeing themselves represented in the right way can lead to self-belief, confidence, value, but also can change the way others see us as well and as Adam Beach explained above, it can also help change power dynamics.

That is why representation matters.